California cherries are the first cherries of the season which is why they are so eagerly anticipated around the world. The short California cherry season begins in mid-May and typically lasts into early June. Among major commercially-grown fruits, cherries are known to be the last trees to bloom and the first to harvest each year. In fact, rumor has it the term ‘in cherry condition’ has been derived because it means something new.

The California Cherry Board, headquartered in Sacramento, is a state marketing order representing approximately 850 growers and 22 packers of all California fresh cherry varieties.  Its governing board is comprised of both growers and packer/shippers of California sweet cherries. The California Cherry Board exists to provide information, crop updates and facts about cherries to our customers locally and around the world. Here is some interesting information about cherries we have compiled for cherry lovers everywhere.

U.S. fresh sweet cherries have been successfully promoted in export markets since the 1970’s.  The promotional programs have included marketing activities at both the trade and consumer levels and in Asia-Pacific, Europe, North America, and Latin America.  In addition to these successful promotional programs, the Northwest and California cherry industries also conduct trade policy activities in many countries to facilitate market access for sweet cherries.  Successful projects have included the opening of Japan, Korea, China, Australia, Mexico, and Chile for U.S. cherries.

The Sweetest Six Weeks of Summer

As you can see in this timeline, California Cherry season typically extends from mid-May through June. This short, six-week season goes by like the blink of an eye, resulting in high consumer demand for California Cherries and tremendous anticipation long before the season begins! 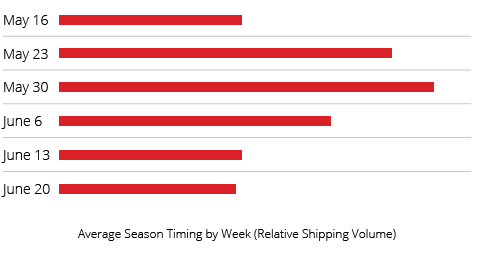 The CCB prohibits discrimination in its programs on the basis of race, color, national origin, sex, religion, age, disability and marital or familial status. Persons with disabilities who require alternative means for communication of program information (Braille, large print, audiotape, etc.) should contact us.